Skip to the content
Login / Register
0
Cart
$0.00
Home » Blog » Stuff about Blasters » Before you fire your Spring Thunder…READ THIS!

The Spring Thunder is such a satisfying blaster to fire. There’s nothing like it. I’m excited for you to experience it.

Some people get confused on how to properly maintain and use their Spring Thunder. I’ll be sending you some tips. If this is your first Spring Thunder, homemade, or 3D printed blaster, then this will be important for you!

1) Check to make sure the screws on the front and back of your blaster haven’t loosened up too much in shipping. Vibrations can cause the screws to loosen up and cause the blaster to lose much rigidity. Simply grab a screwdriver and gently tighten down the screws.

2) Read the following about firing.

To load your Spring Thunder….

1) Insert the loaded shells into the bottom of the blaster, the open end of the shells first. Load up to 4 shells at a time.

*The loaded shells should NOT sit into the chamber area of the blaster.*

2) Pull the pumpgrip back. Watch the shell cycle into the chamber.

A shell will move from the first to the second shell latch at the entrance of the magazine tube. Continue pulling back and it’ll move from the second latch onto the lift. As you continue to pull, the lifter will lift the shell up. Eventually the blaster will prime and come to a natural rest.

*Make sure you pull the pump grip back until the blaster clicks and a shell is visible in the chamber. You might have to go about 1/4 inch farther than you think. *

3) Then to load the shell, push the grip forward and you’ll notice the lifter move up, pushing the shell into alignment with the barrel tube, and finally come all the way forward into the barrel.

Once the pump grip is completely forward, FIRE!

The Spring Thunder can use Boomco, Mega, Elite, Double Elite, and Rival shells.

For rival, you can load up to 3 balls per shell.

You can get extra shells here

Large Pump Grip – This is a comfortable grip for large hands. Check it out here 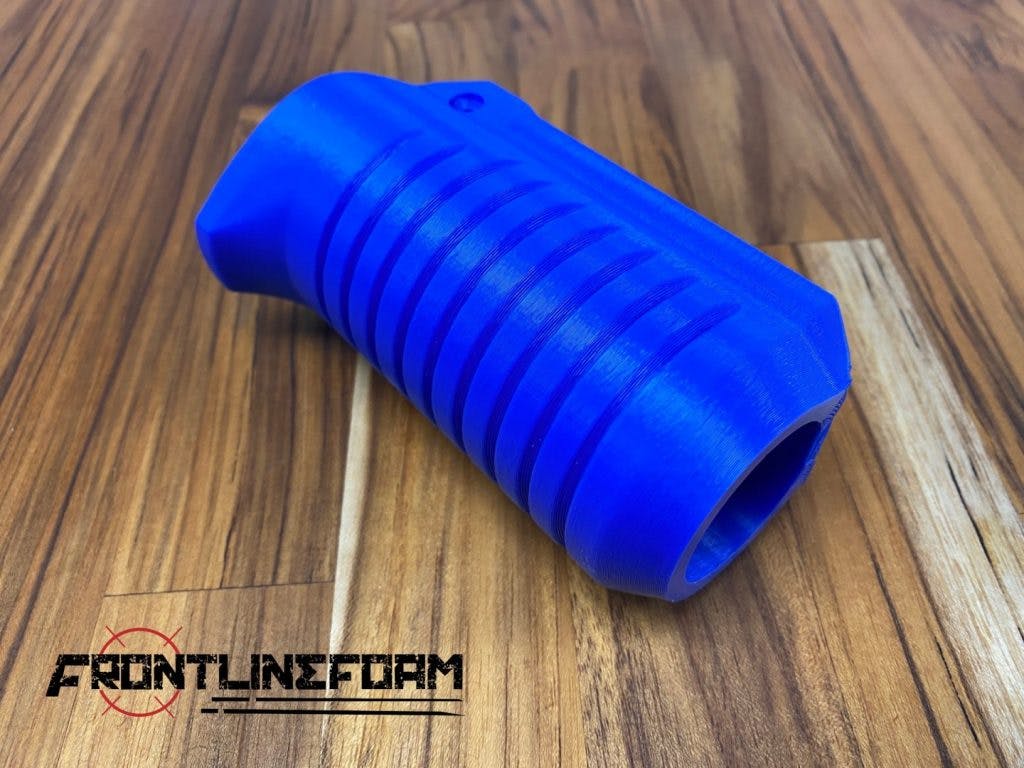 Top Picatinny Rail – This rail makes your Spring Thunder compatible for add-ons and sights. Check it out here

Stock helps a ton for stabilization and cycling the blaster. Vector and sling are two options.

Check out either stock here

Match Saver Shell Holder – The match-saver holds an extra shell which is useful in a pinch.

Check out the match saver here

Shell catcher net can be useful if you’re worried about losing shells or them dropping somewhere you don’t want them to go. I recommend the velcro elastic option personally. It’s easier to adjust and position.

Check out the shell catcher here

– Don’t leave your 3D printed blaster in the direct sun for a prolonged amount of time. This can cause the plastic to melt. Leaving your blaster in the shade or the trunk of a car is generally just fine.

– Always use eye-protection. I owe my eyes to my eye-pro many times over.

The mag follower poped out.

(The mag follower is the black cylinder that sits just beyond the chamber you load the shells into.)

If you’d like more information on how to disassemble and reassemble your Spring Thunder, check out the Spring Thunder Build Guide

If the shells stay in the ejection port and don’t pop out, check to make sure the extractor arm isn’t broken and it’s spring has adequate tension.

Check to make sure the meta plunger tube has a small notch filed down as for fit the ejector arm.

If the shells don’t come out of the magazine tube all the way, check to make sure the shell bottom is smooth. If the shell is getting stuck or not releasing when the shell catch is retracted, try sanding a little bit off of the tip of the catch.

Generally the Spring Thunder is a very reliable platform. Happy to help troubleshoot if you encounter any issues, though.

Previous: THE MAGPIE | TIPS & TRICKS
Next: HOW TO USE AND MAINTAIN YOUR FDL