Some people are confused about which regulator to choose for their HPA setup.

The two most popular are the Empire and Storm Regulator. The Empire has an on/off switch which means you can in theory store your tank on the regulator itself and not have to remove the tank (which you should anyway). That means if there’s any small air leak in the system, you can just store it switched off so the air doesn’t leak. Kind of like a battery.

The Empire also has a pressure gauge that starts at 0, so it’s easier to physically see what PSI you’re using, but from a performance standpoint, it doesn’t make a difference. It just means if someone asks you what PSI, you can tell them. 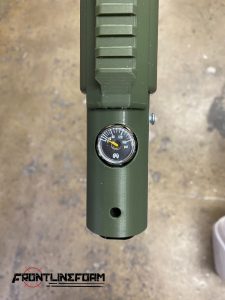 The main and biggest disadvantage is that the Empire reg requires a special adapter to go from the Empire output to an airline. It doesn’t make much of a difference though. The only difference is that it makes the Empire reg a little harder to use. I have some though if you need them. The unique fitting is the Empire Regulator Adapter..

The other disadvantage of the Empire Regulator is the size. The Empire adapter is a smidge bigger and the output is out the side, so it isn’t as easy to use. Again, not much of a difference, but it just means you’re limited to where you can put the tank which limits your ergonomics. You could also use a bottle adapter to make it a remote line though, but then your adapter would still have to be in the same place.

If you purchase an HPA blaster from me and select an Empire Regulator, then it will come with all the necessary parts and fittings.

Previous: Here’s what HPA nerf is like
Next: TIPS & TRICKS FOR YOUR BULWARK